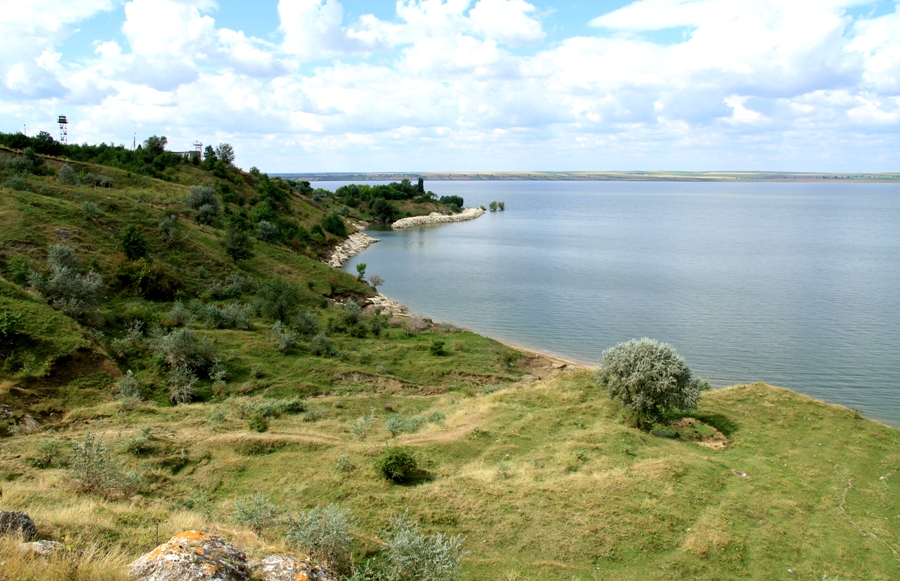 Moldova is poor in surface water. This can be explained by the fact that the precipitation is relatively small here and the evaporation is strong. The influence of rugged relief is obvious as well as ravines and gullies drain the areas strongly. The problem of the proper use and protection of water resources and investigation of new sources of water is important for Moldova as it is intensely inhabited.

There are few large rivers that carry large amounts of water in Moldova, but there are a lot of medium and small rivers. Therefore, the river pattern resembles a tree with a dense and complex system of branching. The pattern include 3085 permanent and temporary streams, 240 of which only have a length of 10 km and only eight rivers (Dniester, Prut, Reut, Ikhel, Byc, Botna, Yalpug and Kogilnik) flow more than 100 km.

Besides the two transit rivers (Dniester and Prut) carrying their water from the Carpathians, all the Moldavian rivers are fed by local runoff. Its averages 20-30 mm per year in the south, 40-50 mm in the middle and 60-70 mm in the north.

All Moldovan rivers belong to the basin of the Black Sea, and almost all flowing across the general slope of the surface flow from the north-west to south-east. Small feeders have different directions but still there are no rivers flowing to the north and west.

The largest river in Moldova is the Dniester. The ancient Greeks and Romans knew it and called Tiras. In the Middle Ages there was the trade route from Lvov to the Crimea and Turkey along this river. The Moldovan majestic fortresses built on the banks of the river are still preserved in Khotyn (Ukraine), Soroky, Bendery, Belgorod-Dniestrovsky (Ukraine).

The Dniester starts its flow in the Carpathians at a height of 759 m above sea level from the springs that go on the northwest slope of Mount Rozluch, then it runs 700 km on the territory of Ukraine and about 660 km on the Moldavian lands. Its annual runoff is about 10 cubic km.

The Dniester like all the rivers that originate in the mountains is a capricious one. Should abundant snow fall in the Carpathian Mountains and the Dniester will spread widely in its lower reaches in spring (usually at the end of March). There are also summer floods caused by heavy rains, which are a feature of the south-western region of our country.

The lowest water level is observed in September and in the winter months. In December the river usually freezes but only for three months; at the beginning of March and sometimes at the end of February the ice reveals the river, ice drifting lasts for 1-2 weeks. The average ice thickness is 15-25 cm, once per each 5-6 years ice doesn’t cover the river, but during cold winters huge ice is formed.

Frequent and unexpected spills have caused great damage to economy and population for centuries as they interfered to make use of floodplain lands fully. In 1954 a hydroelectric power station was built near a small town of Dubossary. Its dam does not regulate the Dniester runoff but still holds and saves its water. Above the dam the large reservoir 14-18 m depth has formed. Now it is the largest lake in the country; its area comprises to 5400 ha. High, rocky, wooded in many places banks of the reservoir is the perfect place for relaxation, fishing and tourism.

The Dniester reaches the village of Vyhvatintsy, famous for the excavation of one of the ancient settlements of primitive man, flowing through the narrow valley often with an almost sheer, formed by limestone cliffs and through many forested areas. To the south the valley expands and reaches 10-20 km in width near the towns of Tiraspol and Bendery. The inclination of the water flow is negligible here and the river forms a quaint, very steep bends that in many places flow very close to each other.

The banks of the river in the middle reaches are steep and rocky; near river lower reaches they are gentle and open pleasing the eye with a constantly changing landscape. Particularly beautiful are Dniester bends in spring, especially in April when continuous white ribbon of blooming apple orchards stretch along the banks. 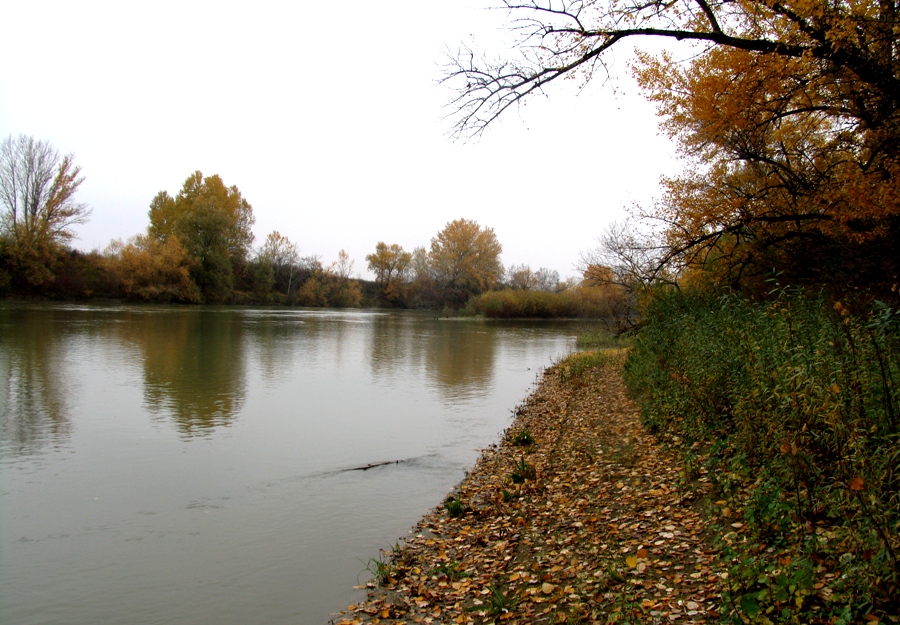 The Dniester water is of good quality: odorless, nice to the taste, has a low mineral content. Throughout its flow the water fits for drinking, irrigation, and industrial use.

The Dniester is navigable within Moldova territory and the journey down the river is interesting. You can see the geological outcroppings, ancient fortresses, gardens ... In the lower reaches of the Dniester there is large nonsaline  Kuchurgan on the banks of which the Moldavian HEPS was built.

The second largest Moldavian river Prut flows along the western border of the Republic. It is very similar to the Dniester in many aspects although it is not that copious. Prut also originates in the Carpathian Mountains at an altitude of 2000 m above sea level on the slopes of Mount Hoverla. In its upper reaches, for example, near the famous Carpathian resort Yaremcha, Prut is a typical mountain river. But when it comes to the borders of Moldova its nature changes very much. The river has worked out a broad valley with terraces and mature floodplain on the territory of Moldova. According to its timeline and types of flood the Prut differs not much from the Dniester as well.

The Prut water is very fresh and tasty, according to the old folk traditions it possesses healing properties. The corporate Soviet-Romanian expedition studied the Prut in 1964-1965. Based on chemical and microbiological analysis it concluded that the Prut is the cleanest river in Central Europe. The Prut water is also used for irrigation. Navigation is possible only along a short distance of the river (from the mouth to the town Leovo). The Prut river is a feeder of the Danube and in its lower reaches is highly dependent on its regime. Danube seems to “prop” the Prut. That’s why so wide the Prut floodplain to the south of the town Cahula is swampy and rich in lakes. The largest of them are Beleu, Rotunda, Bodelnik, Foltana, Drachele are very beautiful, rich in fish and waterfowl.

The internal Moldavian rivers are very different from the Dniester and Prut rivers on their regime. All of them are shallow, in summers become even shallower and sometimes completely dry. The water is rather mineralized and sometimes it doesn’t fit to drink. Especially “salty” are the Big, Medium and Small Chuluk rivers and Kula in northern Moldova and Yalpug, Lunga, Kogilnik, Sarata, Botna, Big and Little Salcha and others in its southern part. They tend to be salt due to their flow on the areas rich in salt-folded Neogene clays. At the end of the summer, especially during prolonged dearth along riverbeds of these rivers solid white lines of salines bleached by sulfates stretch on the river banks.

More fresh water is contained in the left-bank feeders of the Dniester river such as Kamenka, Belochi, Molokishe, Ribnitse, Yagorlyke. They start their flow at Podolsk Upland and cutting it create deep (120-150 m), sometimes canyon-like valleys formed by sandstones and limestones. Good water is carried by left feeders of the Prut river flowing through the northern part of the country (Rakovets, Chugur etc).

The Reut is an extraordinary river. It is the largest internal river in Moldova, 300 km long. It starts in the elevated part of the Northern Moldavian plateau near the village of Redu Mare at the height of 146 m above sea level and flows into of the Dniester river near the village Ustje in front of the town of Dubossary. Among the Reut feeders there are some quite large rivers with a constant flow such as the Cubolta, Kynar, Big Chuluk, Kula. 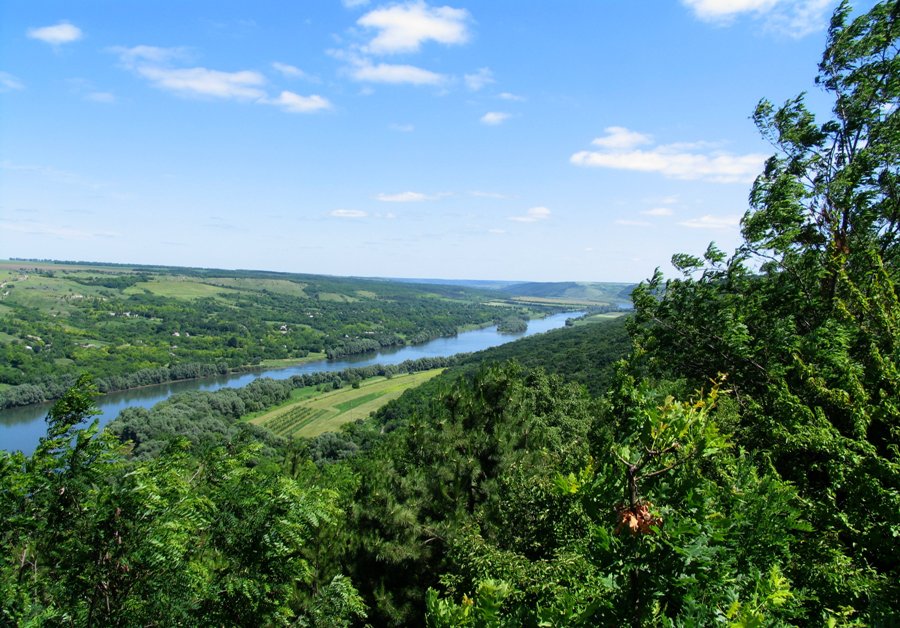 From its origin to the town of Byeltsi the Reut river flows almost exactly north-south, then abruptly changes its direction latitudinal and flows mainly south-east starting from Floreshti. Near the town Orgeev Reut valley saws the stone ridge. Near Old Orhei and Trebujeni village the river is wonderfully picturesque: its narrow canyon valley is really writhing in the limestones. It is a very rare case when the river canyon has a rectilinear direction, and forms curves, though such phenomenon is usual for some other Moldavian rivers making them strikingly beautiful and stunning. Upper the Tovtry ridge the river forms a broad Orgeev lowland heavily waterlogged and saline.

The Byk river on both banks of which the city of Chisinau was built begins in a wooded part of Central Moldavian upland at an altitude of 175 meters. Near city of Bendery it flows into the Dniester river forming a shallow estuarine wetland and a lake which bears the same name of Byk. Slightly higher than the city of Chisinau, the river was blocked by the dam in 1963-1964.

The created reservoir which is called the “Chisinau Sea” occupies the area of about 1,000 ha. Its shores and beaches turned into a zone of recreation and tourism; the water is used for irrigation of vegetable plantations in the suburbs of Chisinau. Large artificial reservoirs were built on other rivers as well. They are Botnia, Kogilnik, Yalpuge.

Since Moldova is poor in surface waters its people have been seeking for means of rational use and conservation of water for a long time. The only way to do it in the old days was the construction of ponds. Of course they were built by hand often in small gullies blocking them with the dams. People also tried to build dams on the rivers like Byk, but as D. Cantemir wrote in the XVIII century “this work didn’t reach their intentions”.

Now there are more than 1,500 lakes in the country with a total water surface area of about 15 ha. When viewed from an airplane, it seems that dozens of sparkling mirrors scattered among the green areas of gardens, vineyards, fields and forests. Ponds usually used in complex tasks (for fishing, breeding ducks and geese, livestock watering, irrigation, vegetable plantations, gardens, and of course for swimming). 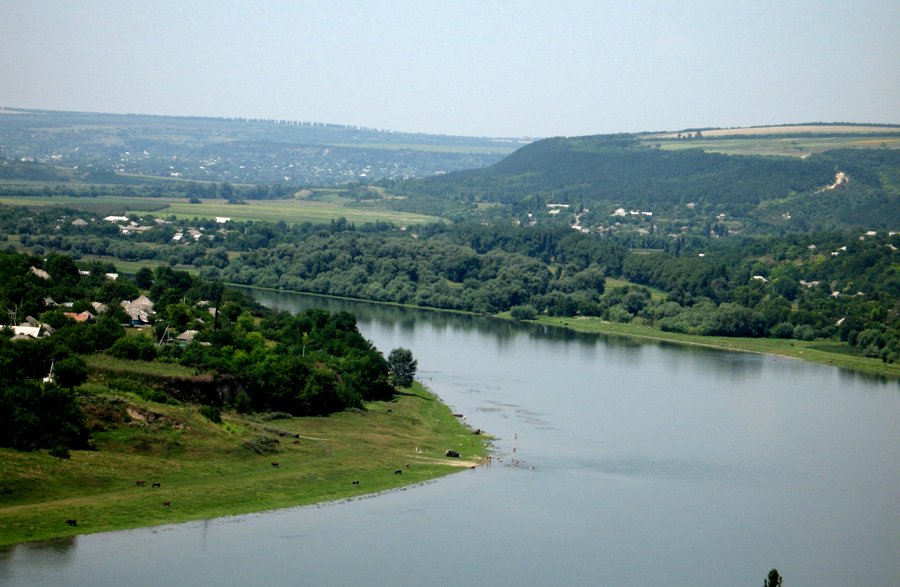 Groundwaters and artesian waters are of great importance in Moldova. Many sources, called izvors, have had an excellent reputation since ancient times because of their lovely cool water, sometimes just nice to taste, and sometimes even possessing healing properties. Moldova has about 2,200 springs with good drinking water.

Groundwater forms several tables on the different geological levels. For water supply and partial irrigation waters of the Cretaceous and Paleogene sediments are used mainly. 1400 boreholes together produce almost 1 million cubic meters of water per year. However, it is not always of high quality, often contains a lot of salt and if used for irrigation can cause soil salinization. In this case it is only good for breeding. Quaternary sediments water is the water table closest to the surface. These waters are very diverse in terms of quality and mostly very good.

Water is obtained from wells. Moldova has got up to 65 thousand of wells that are also widely used in everyday life.